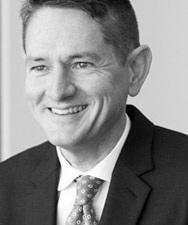 Garry has extensive experience advising on and acting for insurers and insureds in a range of insurance-related matters, with a particular focus on workers' compensation, employers' indemnity and personal injury claims. He was listed as preeminent workers' compensation lawyer in the 2016 Doyle's Guide.

Garry's focus is on state workers' compensation and employers' indemnity claims. He advises on the management of litigated and unlitigated claims as well as on strategies for resolution, contribution and recovery. In addition to formal and informal settlement conferences, Garry has appeared as counsel in courts and tribunals at all levels, including the Arbitration Service of WorkCover Western Australia (WA), the Administrative Appeals Tribunal, the District Court of WA and the Supreme Court of WA. He has a particular interest in appellate work and has successfully appeared on numerous occasions in the Court of Appeal and High Court.

Garry advises and acts for international and national insurers as well as insureds.

Garry was previously a partner at Jarman McKenna before the Perth-based boutique insurance law firm merged with Sparke Helmore in March 2017. Before this he worked in the insurance teams of (then) Malleson Stephen Jaques and Jackson McDonald.

Garry is passionate about the community and is actively involved in many local government and LGBTIQ groups.

When Garry should be at the gym, you're more likely to find him at the theatre or cinema, enjoying a meal with family and friends or playing with his dogs.