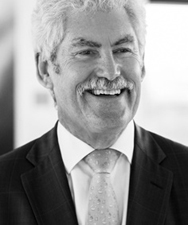 Bill is a highly experienced and credentialed finance lawyer with more than 30 years’ experience advising domestic and offshore banks and financial institutions. His experience covers all forms of financing from syndicated secured and unsecured lending, bilateral and club loans as well as asset financing. Bill has been involved in a number of major project financings, including PPPs. He also has a well established reputation in the surety bonding/performance guarantee space.

Since the introduction of the Offset Regime under the Income Tax Assessment Act 1997 (Cth) in 2008, Bill has become one of Australia’s leading film finance lawyers. He represented the U.S. based banks providing funding for the award-winning Hacksaw Ridge and Russell Crowe’s The Water Diviner to name just two of the productions he has been involved with.

Bill is known for his thorough understanding of the credit process, and the requirements and needs of banks and financial institutions to meet client demands in the rapidly changing environment they operate in.

The depth and breadth of Bill’s experience allows him to quickly identify and then resolve risk and documentation issues. He is highly regarded for his pragmatic approach and capacity for project managing transactions of complexity or where there are significant time constraints. Clients often refer to Bill as “user friendly”. At a previous law firm, he was the relationship partner for one of Australia’s largest banks for more than seven years.

Bill’s clients include local Australian banks and financial institutions as well as European and U.S. banks—particularly U.S. based banks that specialise in film and media financing.

Bill’s career started at Sydney law firm Holman Webb, where he became a partner at age 29 and was instrumental in setting up the firm’s Brisbane office. He joined Phillips Fox (as it was then known) as a partner in 1990 and was variously national head of the Banking & Finance Group, head of the Corporate & Financial Services Group and was a member of the board for five years before the firm became part of DLA Piper. In 2015, Bill joined the partnership of reputable banking firm, Kemp Strang.

Bill works at maintaining a healthy and active life style, which includes running and paddling (and trying very hard to lower his golf handicap). When he isn’t participating or following sport, Bill indulges his passion for art house film and, given his film financing expertise, is a chronic viewer of the credits—hoping (mostly in vain) for some personal recognition. He also has an interest, but little knowledge, of architecture.

Changes to the Producer Offset Regime