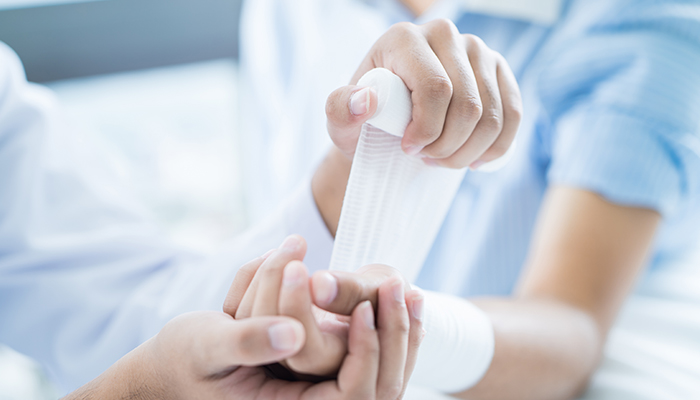 Welcome to the 42nd edition of Sparke Helmore’s MAD Weekly.

The claimant alleged injuries as a result of rear end collision, which occurred on 30 August 2018 as she was preparing to exit her vehicle. She alleged a number of injuries, including to both her wrists. It was alleged she suffered a scaphoid fracture to her right wrist, which caused asymptomatic arthritis to become symptomatic and that an injury to her right wrist developed as she favoured that wrist due to her left wrist injury.

The claimant was not working at the time of the accident and was caring for her two young children. She had previously worked in administrative roles in a school and the travel industry before the birth of her first child.

She also had pre-existing neck and shoulder complaints documented in her GP records. She also had an ultrasound guided injection of the left shoulder about 12 months prior to the accident.

The claim was limited to damages for economic loss.

The claimant alleged it was her intention to start a cake-making business and evidence was led by the claimant and her husband as to some of the preparatory work that had been undertaken with a view to commencing that business.

She further alleged that she would have worked part-time (25 hours per week) from February 2019, until 2029, when her youngest child turned 15, and thereafter would have worked full-time until age 67. She contended she had no residual earning capacity due to her wrist injuries.

A claim was made for $92,688.33 for past economic loss and $528,370.06 for future economic loss. This was based on a loss of $731 net per week for part-time work and $1,064.15 net per week for full-time work.  It was alleged that the claimant had significant functional limitations as a result of her wrist injuries in making cakes and using a computer. It was not alleged that any other injuries related to the accident impacted her capacity to earn.

The Member was satisfied that the claimant would have run the business on a part-time basis up to 25 hours per week. In the alternative, the Member accepted that the claimant would have worked in an administrative role similar to that which she had performed previously, of up to 25 hours week, if the business was not successful. The Member considered it was a speculative exercise to determine the likely income of the cake-making business and elected not to assess damages on the potential income of that business.

The insurer submitted that there should be no award for future economic loss because the claimant’s accident-related injuries had resolved (including the accident-related aggravation of the arthritis), and in the alternative the evidence supported the claimant had a residual capacity to earn and could work up to 25 hours per week in suitable employment and an award by way of buffer up to $100,000 was appropriate.

The claimant relied on the decision of Nominal Defendant v Livaja [2011] NSWCA 121 and referred to the following passage:

“Earning capacity must be measured by reference to the individual, when viewed with all his or her characteristics, in the labour market. When a person in middle age has spent all his or her life in a skilled or semi-skilled occupation which, as a result of injury, is no longer available, the identification of occupations which are theoretically available is only part of the task. There must also be a practical assessment of the likelihood of the individual obtaining employment in some such occupation...”

The insurer also submitted that there should be a reduction for vicissitudes of 100%, or in the alternative 35-50% based upon the possibility that the claimant’s pre-existing neck and shoulder symptoms would have affected her ability to earn. The Member agreed that the claimant’s neck and shoulder complaints may give rise to a loss of capacity to earn and that there should be an increased allowance for vicissitudes, assessed at 20%.

Findings: The Member awarded $299,163 in damages calculated as follows:

MOTOR ACCIDENTS—claim for statutory benefits—whether claimant wholly or mostly at fault—claimant passenger on bus and moved down aisle—interpretation of CCTV footage.

The claimant was a passenger on a public bus when she fell and sustained injury as the bus came to a stop to allow the claimant to alight and to pick up passengers.

The insurer ceased paying statutory benefits after 26 weeks alleging that the accident was caused wholly or mostly by the fault of the claimant.

The claimant referred the dispute to the Commission pursuant to s 3.28 of the Act following the decision being affirmed on internal review.

The claimant submitted that the insured bus driver braked suddenly. While it was conceded that the claimant was standing, it was denied that this meant she contributed to the accident, and to a degree of more than 61%.

CCTV footage of the accident was available. The claimant alleged that the footage demonstrated her falling backwards “violently” and that this inferred the insured bus driver broke suddenly and hard. The insurer submitted that the footage demonstrated the insured bus driver slowed and stopped as normal and that the claimant fell after standing and walking down the aisle while holding her mobile phone, a shopping bag and her bus pass, and that she was not holding onto any of the available hand-rails at the time.

The insurer submitted that there was no fault on the part of the insured driver, the claimant behaved in a negligent matter and her negligence was the sole cause of the accident.

The Member opined that the footage demonstrated the claimant stood up and moved along the aisle while the bus was moving, her hands were fully occupied and she did not hold onto anything, such as  the upright rails or the handles on each bus seat, which could have provided the claimant with support while she moved to the front of the moving bus. It was noted that the claimant had held onto parts of the bus previously during her journey on review of the footage.

The Member agreed with the claimant that standing did not mean the claimant contributed to the accident, but this was only the case if she had been holding onto the supports available.

Findings: The Member determined that the claimant was wholly at fault for the motor accident.