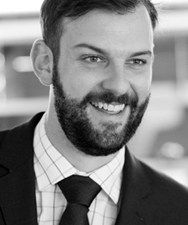 Tom is a litigator, specialising in administrative law. He regularly advises and appears for government departments and agencies in dispute resolution involving reviews of government decisions.

Tom represents Commonwealth and state departments and agencies as a solicitor advocate in the Administrative Appeals Tribunal, Federal Circuit Court, Family Court and Federal Court. He has experience acting for and advising government clients across a number of different areas and has undertaken multiple secondments to Commonwealth clients.

Tom has a Juris Doctor and Bachelor of International Studies from the University of Sydney.

Before joining Sparke Helmore in 2016, Tom worked as a judge’s associate in the Federal Circuit Court of Australia.

He is also a keen sports fan and, in particular, a long-suffering NSW Waratahs fan. On Thursday evenings, however, it’s Tom’s teammates who are long-suffering as he does his best approximation of a touch football player.