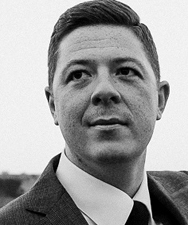 Patrick works on a variety of transactions, from one-off procurements to multi-phased billion-dollar acquisitions. He advises on procurement and contracting lifecycles, including preparing approach to market documentation, managing the tender open phase, tender evaluations and negotiation of contracts. Patrick is also experienced in providing advice on above-the-line and below-the-line contractor services.

Patrick has a Bachelor of Laws from the University of Canberra.

Before joining Sparkes, Patrick worked in a variety of roles in both the public and private sector.  He has worked as in-house counsel for one of the major Commonwealth Government departments and in a commercial advisory role with Big 4 consulting firm.

Patrick is an avid martial arts practitioner, often injuring himself whilst throwing someone around (or being thrown around). His sporting interests are contrasted by his love of food and wine, which seem to cancel out the health benefits of his training regime.

Outside of this contradiction, Patrick is an avid photographer, boom bap music enthusiast (if you know, you know), and devoted dog owner. He often jokes that he only works so hard to keep his dog in the lifestyle to which he is accustomed.

State of emergency for contracts

Copyright 2020 © Sparke Helmore. This publication is not legal advice. It is not intended to be comprehensive. You should seek specific professional advice before acting on the basis of anything in this publication.