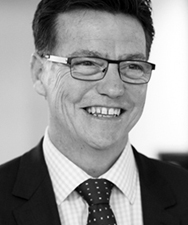 Colin is an experienced insurance lawyer who rejoined Sparke Helmore's liability team in 2017. He has more than 23 years' experience advising on most areas of insurance litigation, including public liability, professional indemnity, property loss, fraud, statutory lines and local government.

Colin works with insurers, brokers, and public and private entities.

Colin has a Bachelor of Laws from University of New South Wales and a Graduate Diploma in Advocacy from Australian National University.

It's hard for Colin to remember a life before Sparke Helmore because he joined the firm as a young lawyer in the mid-1990s. Like most young people, he wanted to have other experiences and after an enjoyable few years joined Phillips Fox (now DLA Piper). He eventually went on to establish his own boutique insurance firm, which he ran for more than 10 years before re-joining Sparke Helmore in 2017, where he has reconnected with former colleagues and is a valued team member and mentor.

Colin loves acting and musical theatre. Last year he made a dashing Darcy in the Bridget Jones Does Blackheath Review. He was the only actor who could wear his work clothes, while singing, dancing and making the audience weep with laughter. He also loves to unwind by playing the guitar, golf and soccer.