Sparke Helmore Lawyers is delighted to announce that Lawyer Nicole Maddocks from our Corporate & Commercial Group was named a winner in the Government category at the Lawyers Weekly 30 Under 30 Awards last Friday night, held at the Ivy Ballroom in Sydney.

"It gives me a great sense of pride when our lawyers take out such prestigious awards. This is testament to the outstanding contribution Nicole has made to her team and the great work she has done for her clients," said Phillip Salem, Sparke Helmore's National Managing Partner.

"I'm proud to win this award at Sparke Helmore, which has such a strong government practice," said Nicole who joined the firm with Partner Scott McDonald in May this year. "It's an honour to be recognised for my work in the government sector amongst a group of extremely talented finalists."

Nominees were judged on their achievements, initiatives and leadership within their teams and the wider community over the past 12 months. Ashley Burgess from the firm's Government Group was also named a finalist in this category.

Now in its fifth year, the 30 Under 30 Awards aim to profile the leaders of tomorrow by recognising young lawyers striving for professional excellence within their specific practice areas. Nominees were judged on their achievements, initiatives and leadership within their teams and the wider community in the past 12 months. 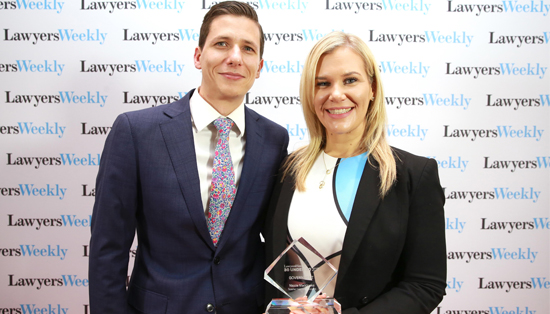