Thousands lined the course to cheer on almost 1,000 competitors who swam, cycled and ran their way to triathlon glory. Thirty-four people from Sparke Helmore's Brisbane, Canberra, Newcastle and Sydney offices competed in the day's various events and more than 40 people volunteered on the course.

Congratulations to the following competitors, who achieved a podium place in the individual Olympic distance race.

"The local community has embraced the Triathlon from the get-go and it is fantastic that we had so many people turn out to help us celebrate this extraordinary milestone of the Hunter Region's premier sporting event," said Sparke Helmore's Newcastle-based Chairman, Mark Hickey.

"We are very grateful for the long-standing successful partnership that the Triathlon has created with the community and its sponsors, and we look forward to many more years of continued success," he said.

Since 1994, the Triathlon has raised almost half a million dollars for charitable causes, including the Hunter Medical Research Institute. In 2018, the event supported local triathlete Lauren Parker through her namesake foundation.

Lauren sustained catastrophic injuries on a training ride in April 2017 and was given a 1% chance of walking again after her accident. She didn't let this stop her pursuing her aspirations though and has since competed in the Maitland Triathlon and St. Kilda OUT Paratriathlon Oceania Championships. She was also, fortuitously, named as part of Australia's paratriathlon team competing at the 2018 Gold Coast Commonwealth Games on the same day as the Triathlon was held. You can donate to Lauren's Foundation, here. 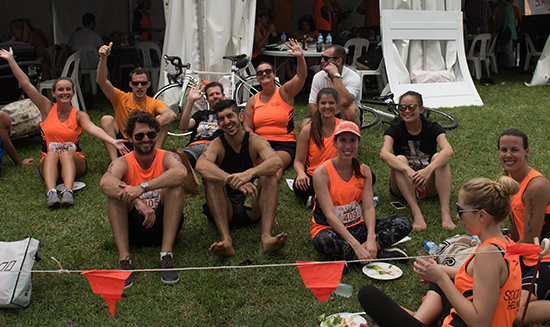 Above: Sparke Helmore volunteers and participants in the Triathlon.